This series emanates from sketchbook work during 2009-11, previous work in the Wasted Series, and my interest in vessels and 3D sculptural forms. I also used ideas relating to pathways, human traits, distortion, dysfunction, and processes involving tatting, working with hands, including felting and knitting.

I used wet and dry felting techniques together with material selection, stitch and 3D construction.

Preparation included consideration of the size, shape, mass, and the making of a plastic template. Black wool would have given this piece more dramatic impact, but I was drawn to using undyed wool for the structure. Formation started with a round base layer, using white carded wool and lace material to add strength. The thick undyed pre-felt was stitched together with a mulberry silk slub yarn to provide contrast and create a thicker and stronger round base. This was also initially dry felted using a single barbed needle, to combine and lock the fibres. The base has three sections an inside and two outer rings. The base and side of the structure has lace as a decorative element which was tacked into place.

I wove a section using a white linen warp, and weft made with a combination of alpaca tops, yarn and jute for the inside. The completed weaving was cut to fit the round inner base and loosely dry felted to the base. A similar yarn is used to stitch a pattern onto the first outer ring to extend the materials from the inside to the out. My design required an optical link between inner and outer (reflecting the complexity of the human character).

The sides were formed from thick undyed pre-felt with a much thinner layer of white carded wool on the inside of a cylinder shape. The outside of the felt was embellished to form ribs in sets of three, leaving flat sections. Thin sections of white pre-felt selected from old stock left over from previous work were overlaid with a variety of fibres – yarns, silks and jute – using the embellisher machine. These formed the decorative and final layer on the inside and also picked up materials and colours contained in the inner and outer base. The lace remnant was cut into strips and these were roughly added to the flat sections on the outside of the cylinder, using the embellisher machine. The top of the cylinder was left ragged but the whole was reduced in size.

Thick pre-felt, cut in two round sections each wider than the last, was added to the base, creating a more structured and decorative outer base. The lace remnant was cut into strips which were tacked to the outer base ring. Then the cylinder was stitched to the base using wool yarn.

The construction was large and difficult to handle. The white embellished lining, prepared in advance, was altered to fit. The weight of the finished centre lining and the unexpected seams meant that stitching was necessary. White linen yarn added strength to keep the pieces together during the wet felting process. This was difficult and time consuming. Another complication was that the unplanned frequent handling made the ribs became undefined, and I had to stitch jute yarn down the sides to ensure the structure survived during the felting process. Sections of wool yarn were used to stitched around the inside using large stitches which added dimension. Silk stitches were used to keep the lace in place allowing distortion as the wool shrinks. 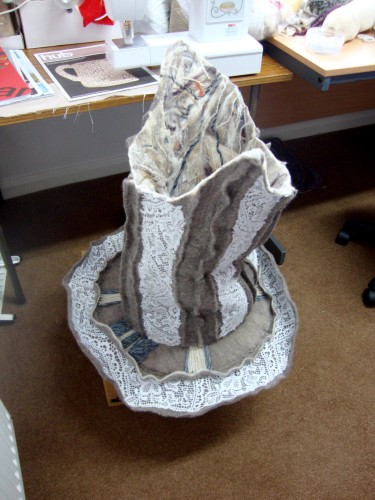 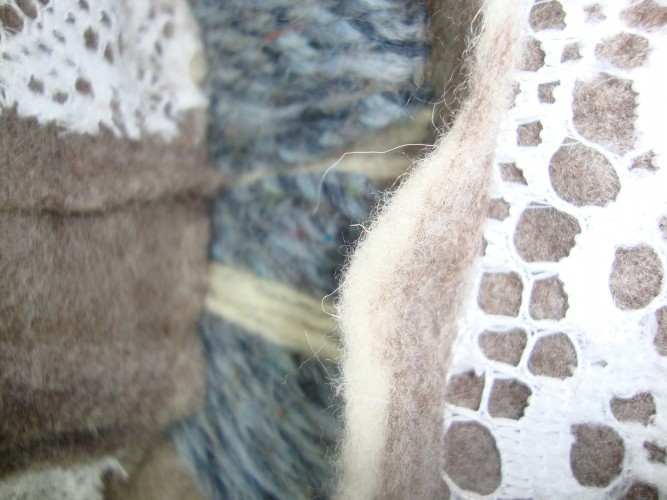 I began with a little hand felting to complete the shape at the top and on the base followed by an initial short, cold run through the washer. The base had not completely felted because of the lace, the yarn used, and the amount of yarn. To solve this, additional needle felting was needed to firm the base. The edges of the felt on the inner and outer layer of the base have been trimmed to follow the flow of the whole piece and further single barbed needle felting of the ridges and lace on the outer body helped to fix the fibres in place. This was time consuming but necessary to ensure all the fibres remained in place during the fulling cycle. Some merino yarn has been added to the base and within the inner body to assist with the final felting process and to lighten up the inner base.

The final fulling using the washer was a short low spin cycle (800 rather than 1600) at 40°. This distorted the whole piece whilst keeping the vessel shape. The random design and colours used inside, with some yarns seemingly making their way upwards, and the variety of fibres, form their own melting pot (my allegory for the human race). 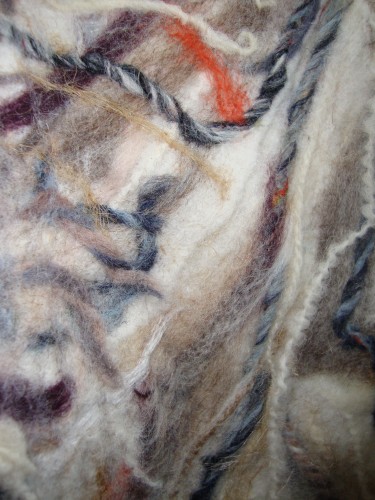 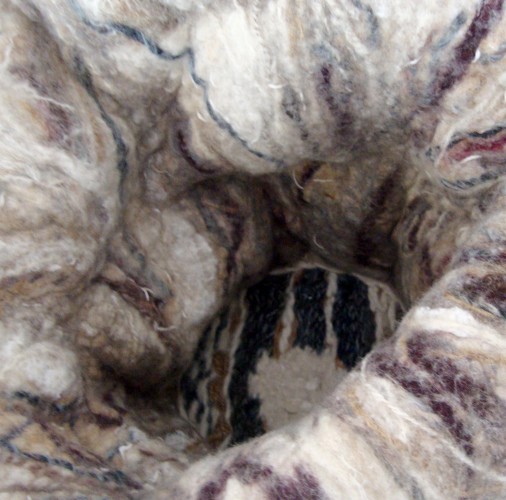 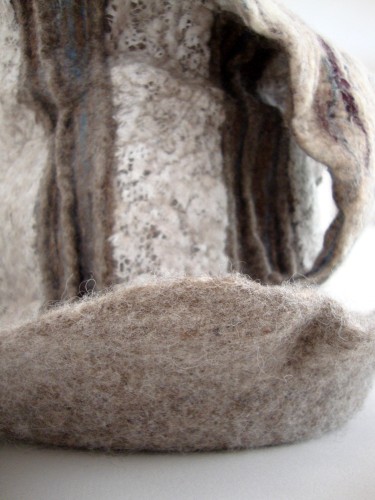 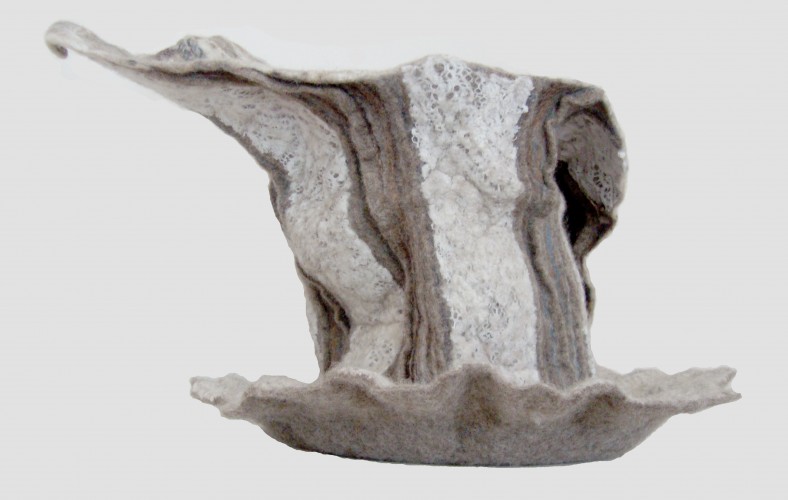 A little tweaking of the shape completed the piece, which was dried. The fibres have compacted well to ensure that the desired shape will hold. I am pleased that the piece has performed well and I have learnt more about yarns used in the process.

The pot represents a wide range of techniques used in textiles – dyeing, spinning, knitting, weaving, darning, tatting and felting. The title was selected from memories of songs from my youth, uses hand made as a strong theme, joining with pathways, representing how choice defines the paths we take through life – some straight and some not so straight, but ultimately made by us, together, as human beings.