This exhibition piece is an un-wearable/wearable, a simple design which imparts unexpected sensory information.

A simple smock design with imperfections, patches (uneven and ragged – using new materials rather than old to give an impression of repair). Cellophane film which will have retained its ability to make noise after the felting process, stitched on a muslin base.

One side will have cellophane placed against the muslin and the other will have a layer of wool between the two. The difference will be evident when explored. White and pink to represent a child’s innocence, inspired by examination of a child’s dress made 800 AD in Egypt (patched and stitched from what was initially an adult garment) – The Whitworth Gallery.

The back of the garment looks more even, although shrinkage due to felting and the cellophane has distorted it beautifully. The muslin open weave allowed the cellophane to be cut and flattened where desired. The combination of materials adds depth and lustre to what is essentially a white garment. The front has been embellished with woven patches of pink viscose, pinklambs wool darned area, and silk filament provided in a ladder stitch to add to the patched effect. By placing wool over the gauze and then adding the cellophane a more varied texture has resulted. There is contrast between the two viscose pink patches and I am pleased with the ragged effect of the larger section. The patches were initially held in place with wool and silk stitches. The silk, Ramie and viscose fibres combined with merino add interest and have felted well with the gauze. Although the front of the garment is softer the noise of the cellophane is evident. Specific patterns could be created by fixing the cellophane in place during the layout and this is worth further investigation.

The bottom edge of the garment is not as ragged as envisaged. This could have been resolved by using more wool. I have used the same technique that I would have used to create a seamless vessel. For a neater edge on the inside, the gauze/muslin could have been overlapped and stitched, but overall, the exhibition felt would work as a garment with its even thickness throughout. 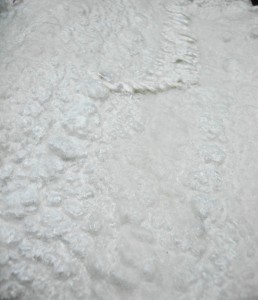 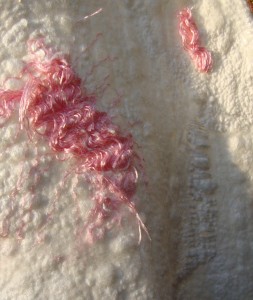 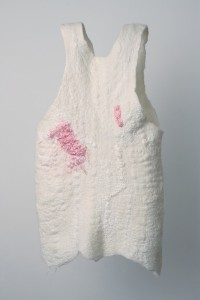 This piece has achieved my aims and will be used as an exhibition piece. To make a seamless garment which can be worn, measurements need to be calculated carefully, and the way the felt is rolled is critical, as this dictates evenness and shrinkage.